I’m going to channel my inner Michael Saylor and soliloquise on the potential of Helium to dematerialize the telecom industry by removing hurdles of large scale network deployment (permits, man power, equipment costs) through utilizing the most over the top insane incentives ever devised in the crypto space. Like Amazon dematerialized retail and Google dematerialized paper maps, Helium will dematerialize telco infra by empowering individuals to bypass hurdles plaguing the industry. Helium empowers the individual like never before by offering unprecedented network build-out incentives and is rapidly constructing a powerful moat in and out of the crypto space.

Turn your view into money

Say goodbye to the relics of a bygone era (left) and hello to cell towers of tomorrow (right).


Traditional network build-out is a nasty proposition only stomached by entities granted monopoly rights over a scarce resource. Even in the smaller IoT domain, building coverage is an exercise in pain. To quote @wlazar

“[traditional IoT networks] take a few years to design and deploy before they could be fully operational… [we] had to negotiate access to limited pole mounting infrastructure…the sales-> network deployment cycle could take years.”


Helium is a lower energy state of network deployment – why coordinate with a municipality to erect eyesores and fight NIMBYs, when an equally productive location lies in a SFR a few blocks away, AND the owner does the installation for you, all while taking marching orders according to blockchain which is the most powerful coordination mechanism ever conceived by man. Helium turns NIMBYs to YIMBYs.

Helium represents a completely new way to monetize location and foot traffic because productive hotspots collectively represent thousands of permits not applied for, thousands of man-hours not billed for and millions of dollars of corporate debt not taken up, but with the same end result as the old way of doing things: ubiquitous and effective network coverage, but in 1/10th the time.

The “Chinese Warehouse” model of crypto mining doesn’t work for Helium for the same reason you can’t fake the speed of light. Helium mining rewards are inexorably tied to providing verifiable and valuable wireless coverage across a geographic area. People are risking life and limb to climb roofs and towers in order to deploy the best wireless coverage possible for Helium. Let that sink in. 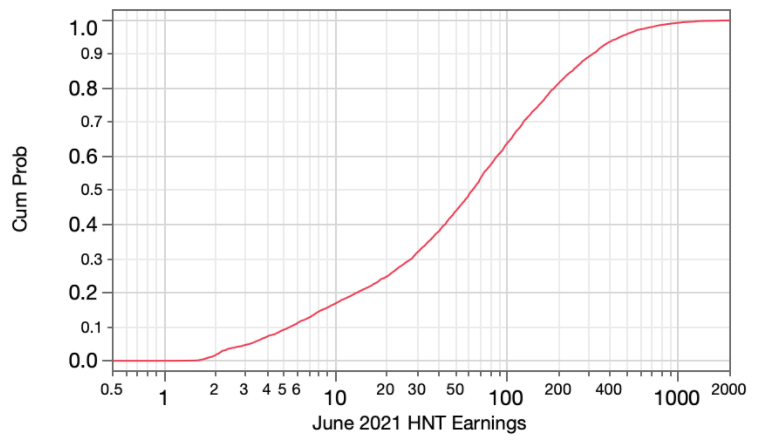 Above shows the distribution of June 2021 mining rewards according to the aforementioned guidelines. The elite top 5% of nodes outperformed the bottom half by a factor of 10x, and outperformed the bottom quarter by a factor of 40x (validators will affect this, but I don’t expect much). What other project offers a 10-40x premium on the same kilowatt hour of mining, just by setting up in the best deployment location?

In other crypto projects, the mining edge comes from access to cheap or subsidized electricity, or economies of scale from warehouses full of equipment purchased at-cost. With Helium, the difference between so-so and phenomenal performance comes from erecting a 10ft mast or striking a deal with your neighbor who has a better view. This incentive produces a never-before-seen bridge from the crypto domain to meatspace. As in real estate, for the first time ever in crypto, it’s about location location location.

The open source crypto community is cutthroat. A small motivated team can fork your code and scoop the market from beneath your feet – just read about the ongoing food-DEX saga or a million other copy-forks just like it. However, in the same way you can’t download a car, you can’t fork thousands of man hours needed to place antennas in the Hollywood hills or high up on a mast. Any incumbent will need to fight just as hard to produce equipment and put that hardware in the hands of enthusiasts willing to hustle (or risk their life) to achieve 40x greater productivity than the rest of the nodes in town.

Hardware lead times are a law of nature, even outside of a pandemic. Helium is adding over a thousand node installations a day, each node representing a person climbing their roof or striking deals on new locations. Most installations are still done by individuals, but enterprise scale deployments are coming — soon. This momentum may be slower than a typical hash rate growth curve, but at the same time its unforkable and not subject to the changing moods of hash power profitability.

Helium is a platform

This year Helium is welcoming a new wireless spectrum outside of LoRa in the form of CBRS 5G in the United States. Freedom-Fi, the first Helium partner to dip their toe into this space, expects to ship hardware in September. Via Discord, they claim to have agreements in the works with 3 data-offload partners, two of which are American MNOs, one being tier-1 (think Verizon, AT&T, T-Mobile), and one MVNO aimed at the prepaid e-sim market.

Fundamentally, this new element of Helium does a few powerful things. To individuals and businesses, 5G CBRS offers new means of monetizing location and foot traffic. Have an apartment across the street from a popular park? Sell 5G data to the visitors. Own a nightclub? Monetize the social media addicted clientele.

Due to B&M economics, HNT must be burned for each 5G packet consumed, so the tokenomics are inevitably aligned to the mobile data consumption growth curve — which is expected to climb by a factor of 5x in the next 5 years. According to analysis from one of architects of the Helium economic model, if Helium can reach $5M Data credit burned per month (~10M GB consumed at $.50/gb), this raises the equilibrium price of HNT to $100. Approximately 3 Billion GB of mobile data transfer occurs every month in the US (link), so 10M GB/month is about .3% of all mobile data.

I know, I know, how many start up pitches begin with “If we can only capture 1% of this enormous market, we’ll all be rich…” But, being real, 5G usage isn’t even priced in yet and we are still realistically 6 months from seeing any real deployments. I personally think Helium could become the largest neutral host carrier in the next 1-2 years.

There you have it. My bull case for why Helium is in fact a different breed entirely from other crypto networks due to entirely novel incentive mechanism and ability to side skirt problems faced by the incumbent industry.