What is Project Pollen? A review. (Part 1)

Pollen Mobile quietly launched on February 1st 2022 to little fanfare compared with typical crypto blitz marketing campaigns. Unless you’re a close watcher of the CBRS / decentralized wireless space, you probably missed it all together.

Part 1 of this article covers the basics of Pollen. Part 2 will address the question everybody has been asking: is this a Helium 5g killer? Be sure to follow me on twitter for more content.

Pollen immediately caught my eye so I dug deeper with an eye towards red flags: sleazy kickstarter vibes, huge markups or just ridiculous vaporware. What I saw was a legit Baicells CBRS hardware lineup sold at-cost, a drop date 7 days after announcement, claims of a working mainnet via Solana SPL token, a working Magma packet core, working eSIM and a working (!!) Proof of Coverage mechanism. No kickstarter vibes, no overpriced hardware.

Learning about CEO Anthony Levandowski’s involvement was icing on the cake. Anthony has been accused of many things but ‘visionary engineering leader’ is one label for which he won’t need a pardon. Pollen, you had my curiosity but now you have my attention.

Given that Pollen’s first launch geography is my backyard, I just had to bite. While the price I paid for an indoor and outdoor unit is steep for any hobbyist budget I justified it with the thought that experience on this system translates directly to the Helium 5G rigs.

After playing with the project this week I’m here to say, YES, Pollen delivers on all of the promises. I am told this has been a big focus of the scrappy Pronto.ai engineering team since late 2021 and I am extremely impressed at what the team has accomplished in a short period of time. Larger teams have accomplished far less with far more time. 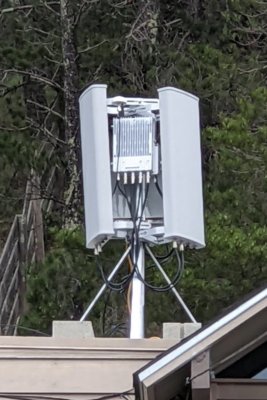 Better to tell my neighbors this is a cellphone tower or a cryptocurrency miner?

Pollen brands itself as a private mobile network: cheap, secure, private 4G/5G data for the masses. The value offered is an intersection between neutral host, home wifi and private networks. Picture a way to supplement poor mobile coverage at your home, or an eSIM you can install on your phone to feel confident you are getting rock bottom data rates when you’re out in public.

However, the way of achieving this dream sounds a little strange if you’re new to decentralized wireless. Building a network, one small owner-operated roof-mounted radio at a time? How can you compete with ATT, T-Mobile and Verizon with their massive towers and spectrum? This is where it helps to know about Helium and the effect Helium’s Proof of Coverage (PoC) incentive has had on the human psyche. Helium has created a culture of people willing to buy hardware, climb roofs and hustle for locations all to the benefit of the Helium network. In other words, Helium PoC convinced participants to absorb the largest costs of building a mobile network in exchange for an equitable portion of the network value. Needless to say, proof of coverage is an effect to behold. One could dismiss PoC as empty crypto ponzi-nomics but you can’t argue with the results.

Here’s what I want to emphasize: Pollen is Helium – but replace the LoRa network with a 4G/5G network. Climbing the roof is the same, hustling for locations is the same and proving coverage is the same. As I’ll explain in Part 2, Pollen adopted Helium LoRa’s strongest growth strategies and skipped Helium 5G’s largest development hurdles, however their private network goals may put a ceiling on success.

Enough talk, does Pollen work as promised? YES! My founders kit consisted of a “Flower”, or the Baicells radio and Magma gateway pair, several small embedded Beaglebone linux devices with a custom printed circuit board and Band 48 modem (Bumblebees) and a bunch of eSIM downloads (Hummingbirds).

The Pollen token PCN can be earned in several ways. eSIM devices can earn a small amount per day by simply attaching to a Pollen CBRS Flower node. Bumblebees earn in a similar fashion, except earnings are multiplied according to the number of unique geospatial Hex9 attachments in a day, coordinated by GPS (side note, this is an abuse vector). Most earnings will go to the Flower, who will receive 10x more rewards for each unique Flower-to-Bumblebee Hex9 confirmation, up to a maximum dictated by the type of Flower.

Just two days after securing equipment, I’ve seen all the main functions work as intended. I’ve proved my location with bumblebees, I’ve roamed with eSIM devices, I’ve had a CPI come check out my install, and earned PCN. I am thoroughly impressed.

The filled turquoise cells indicate a bumblebee has verified a radio connection within this hex. The empty cells indicate…something else (i’m not sure).. There is also a bounty system, where signal validation events in some cells are worth a bonus. Clearly there is much to be improved in the UX of just about every feature, but the core is here.

At a later date mobile data transfer & other mechanisms will factor into rewards. Worth emphasizing is that for now the network is basically dishing out stable coins because the PCN token is designed to be pegged at 1PCN = $0.10. To me this looks like a trick to avoid securities law conflict, akin to airline miles. Anthony, take note: compliance will be a significant part of your life if Helium’s Amir Haleem SEC experience is any indication. People love speculating, DeFi and price action. Give the people what they want.

Can Pollen achieve its goal of creating supplementary offload opportunities for eSIM users? There are ~40 Helium hotspots per square mile in San Francisco, which is a ridiculous density. If just 10% of those users deployed a CBRS radio, that’s 4 radios per square mile. Suddenly a viable cheap & private mobile network in San Francisco doesn’t seem crazy. The early adopter culture of crypto is legendary, so I actually have no doubt we’ll see some serious adoption in SF at least. However, I think Pollen token economics need a major overhaul before we can expect stratospheric results. 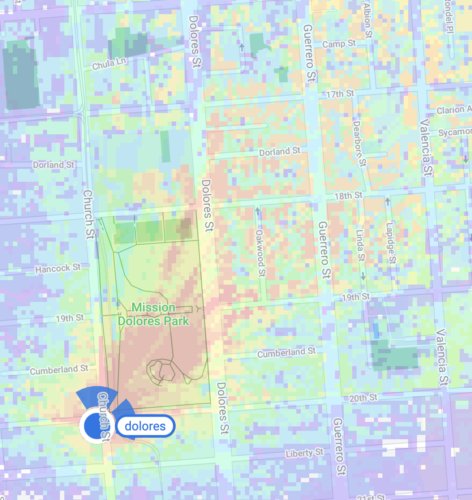 Above is a modeled CBRS Band 48 coverage map of an outdoor node similar to mine, positioned in prime real estate overlooking Dolores Park, San Francisco. On a sunny day, this park sees tens of thousands of folks visiting and hanging out for hours. One of these outdoor nodes can easily blanket the entire park with coverage. The thought of giving visitors an alternative source of mobile data is very enticing; I fully expect we will see these kinds of deployments pop up, owned by the lucky few with access to such valuable real estate.

I found these signal propagation models quite accurate when applied to my own neighborhood. After doing spot checks with my Pixel 6 Pro + eSIM I was able to stream youtube videos about .25 miles from the base station, within a total area of about a tenth of a square mile filled with about 80 suburban homes. I lacked line of sight for pretty much the whole time with tons of large trees and typical residential objects blocking LOS. Superior positioning will surely grow this usable area by a factor of 2-5x.

No matter how you slice it, a talented team just entered the decentralized wireless ecosystem who have managed to pull off something exceptional in a short amount of time. 2022 is starting off to be a great year for DeWi. Stay tuned for Part 2 where I’ll go into depth about how Pollen differs from Helium 5G.